With its formal Main Dining Room, Grand Canopy Tent, and over 100 acres of grassy fields and protected woodlands, The Wayside Inn is the perfect place for your next family, corporate, or special event. Whether it be a baby shower, rehearsal dinner, family reunion, corporate lunch, outdoor fair, or festive tent reception, we have just the right space and atmosphere to provide you with a memorable experience.

With a hospitality tradition of over 300 years, we can provide the perfect venue and menu for your special function. Click on the menus below to discover a variety of options. We are also happy to custom design a menu for your function. Please contact our Functions Department at 978.443.1776 ext 2. We're here to make your function a memorable success.
Brunch
Brunch Buffet
Lunch
Minuteman Lunch
Banquet Lunch
Dinner
Banquet Dinner
Bountiful Dinner
Colonial Dinner Buffet
Additional Menu Choices
Hors D'Oeuvre
Bar and Beverage
Cake

View Our Dining and Event Rooms

Our guests may dine or host functions in a variety of unique spaces at Longfellow's Wayside Inn. All of our dining rooms have fireplaces (operated seasonally), period decor, their own special charm, and vary in size so we can accommodate both small and large parties. 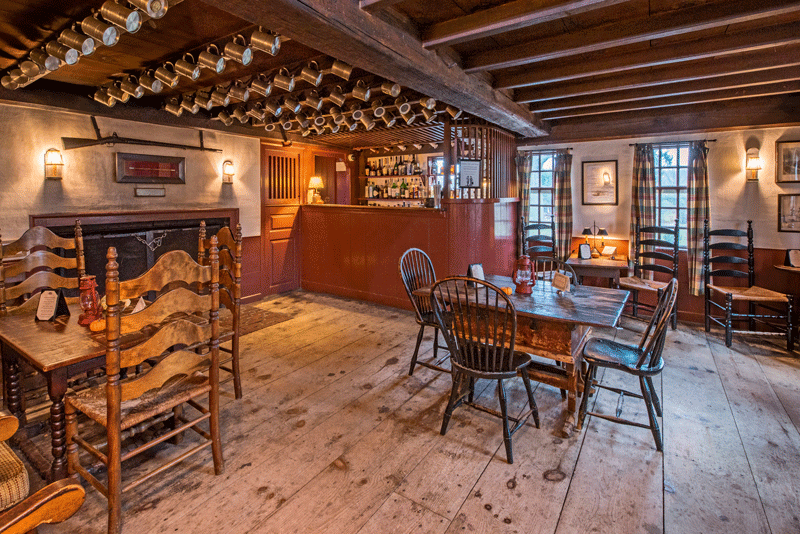 In 1707, The Old Bar was the downstairs room of the original two-room two-story house built by David How for his family. This room was the heart of the home where all of the cooking, eating, gathering, and work was done. In 1716, when How was granted a license to operate a “House of Public Entertainment," this room became the first “public” room of the Inn for food and drinks. A “hidden” staircase tucked behind a small door provided a discreet escape for stagecoach travelers to upstairs bedrooms. Graced with an old wood-beamed ceiling from which pewter mugs dangle and capture the warm light of the generous fireplace, this room continues as our full-service bar and is a favorite refuge steeped in history for guests to gather. 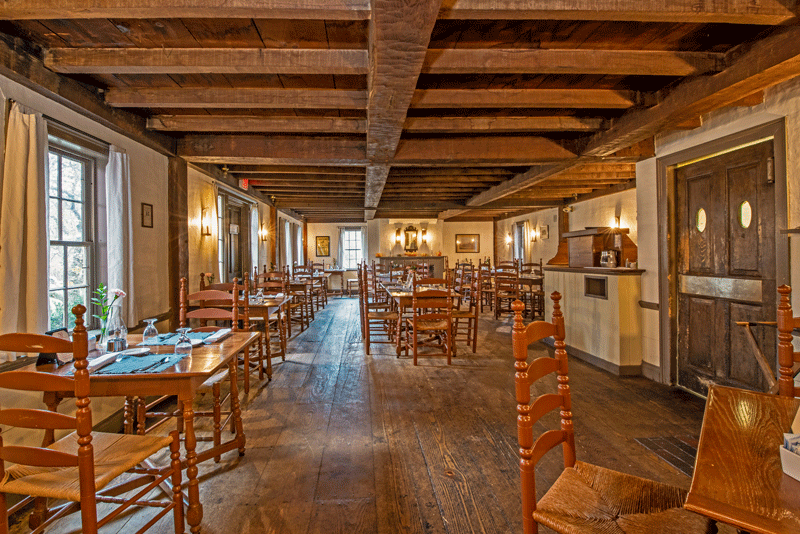 This room was added to the original Inn around 1795, as increased tavern business necessitated a larger cooking space and an additional fireplace. For many years, this room served as the main bar for the Inn (and the name stuck – “Tap” being another name for “bar”). Now a dining room with old beamed ceilings, wooden floors, and two fireplaces (one with a beehive oven), this room has a warm, charming atmosphere for friends and family to enjoy our hearty New England meals. 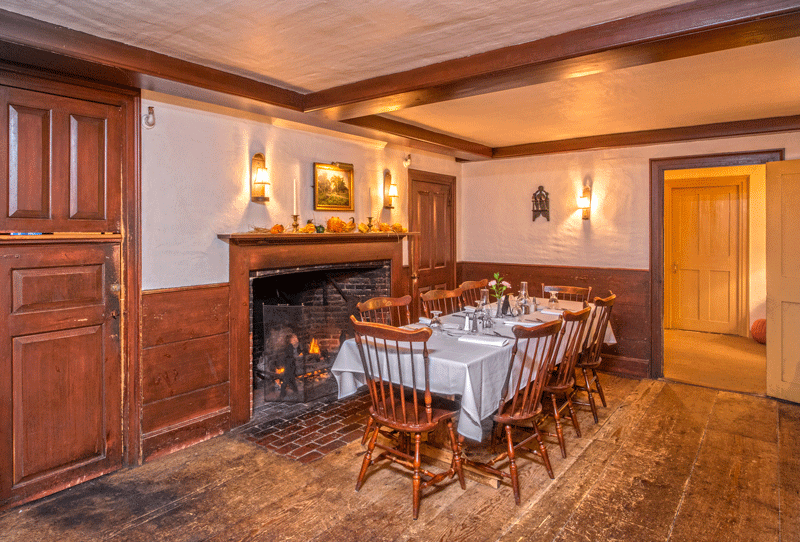 In 1775, when General George Washington travelled to Cambridge to take command of the Continental Army, he travelled along the Old Post Road, right in front of the Inn. A stone monument outside our front door commemorates this historic passage and this room is named in Washington’s honor. An addition to the original 1707 Howe home, this room was used by Edward and Cora Lemon, owners and innkeepers from 1897 to 1921, as a public dining room and is so used to this day. Although one of our smallest dining rooms, its warm wood paneling and large fireplace create an intimate space for special celebrations. 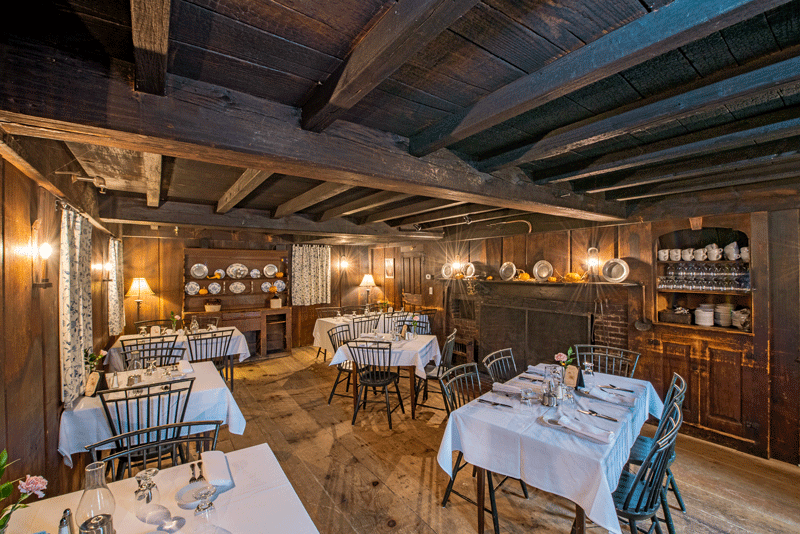 Part of a separate house that was incorporated into the main Inn building sometime after 1796, this room was originally a kitchen with its large fireplace and a beehive oven used to prepare meals for the many travelers along the Old Post Road. A gravity-fed brass clock jack mounted to the fireplace turned the spit to roast joints of meat. With some of the oldest surviving wood beams and paneling at the Inn, some which wear visible scars from the 1955 fire, and an old cupboard stocked with pewterware, this room is often requested by our guests for its special ambiance. In fact, this room was Henry Ford's favorite room for entertaining guest while he owned the Inn. 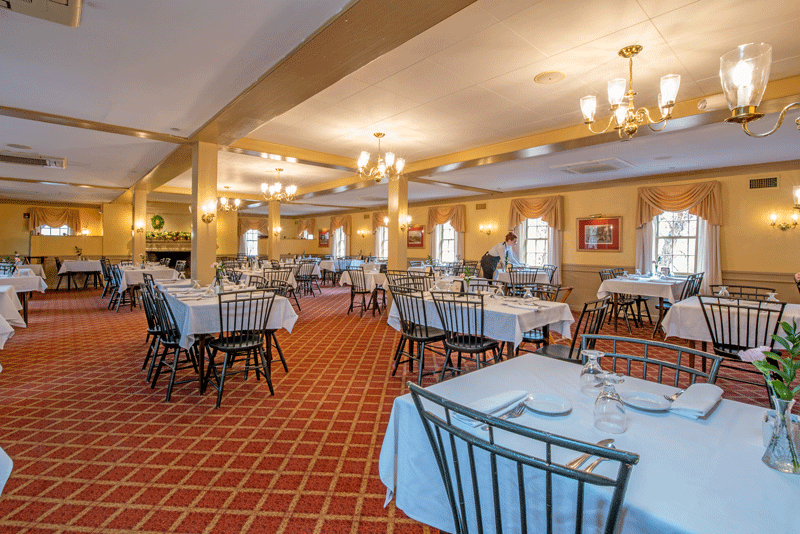 The last addition to the Inn, this is the largest and newest of all our dining rooms. Created in 1924 by former owner Henry Ford, this room originally had a much more rustic appearance. Today, this room is more formal, decorated in a light, traditional colonial revival style. With abundant windows, brass light fixtures, and a beautiful fireplace, this room has become one of the most requested rooms for dining and larger functions. 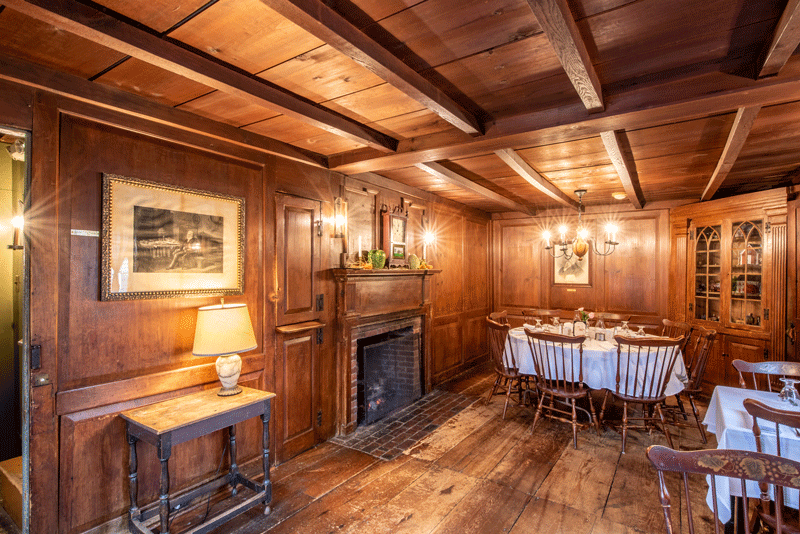 The Innkeeper's Room was originally a separate building added on to the Old Kitchen, and likely used as a storage room. The fireplace and wood paneling were installed by Henry Ford after he purchased the Inn in 1923. Ford used this room as part of his private quarters when he was in residence at the Inn. The antique wood walls, old floorboards, beamed ceiling and fireplace create a charming atmosphere for our guests today. 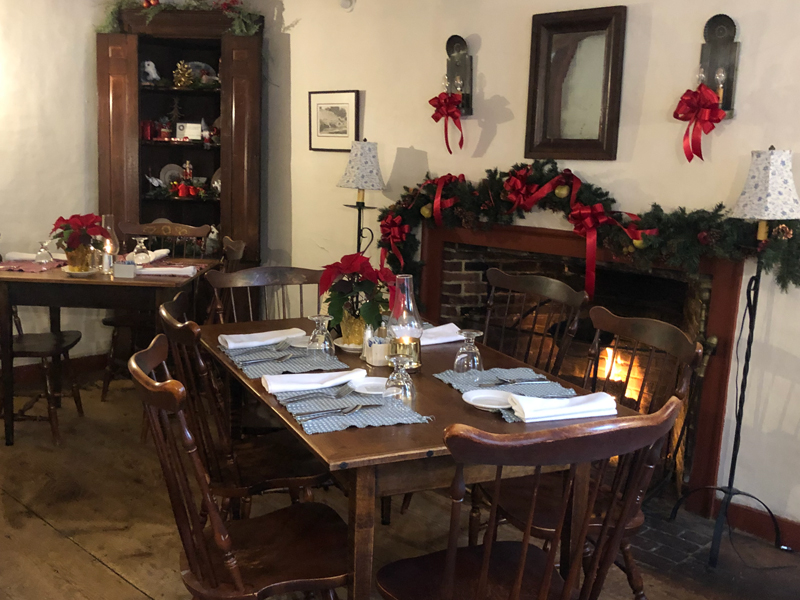 This room was added by innkeeper Ezekiel How (sometimes spelled Howe) in the mid-1770s to serve as living, eating, and sleeping quarters for the growing business. On completion, it doubled the size of the original Inn. Originally called the back parlor (it is located behind and could be accessed from the front parlor -- today’s Longfellow Parlor museum room), this room is now named in honor of the How(e) family, founders of the Inn. This charming, fireplaced room with soft, red painted wood trim serves as one of our smaller dining rooms. 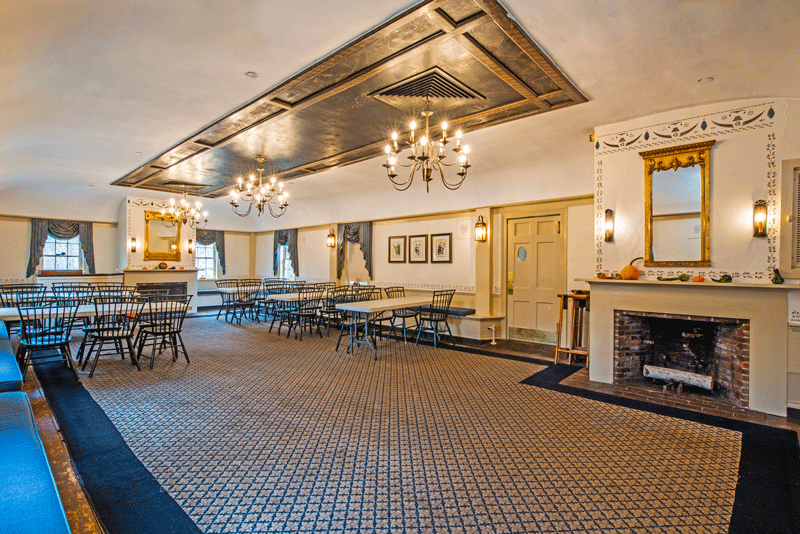 First referenced in 1796 by Ezekiel How as the “long chamber,” this room was subsequently converted into a large room for dancing, music and entertainment by Adam How, and to this day, features a small fiddler’s stand to the left of the fireplace at the far end of the room. The black painted ceiling disguised smoke from the original candled (now electrified) chandeliers. Reconstructed during our 1950’s renovation, this room is decorated with custom hand-stenciled walls, cushioned “wallflower” seat-benches, and two fireplaces. It is a favorite room for medium-sized functions. 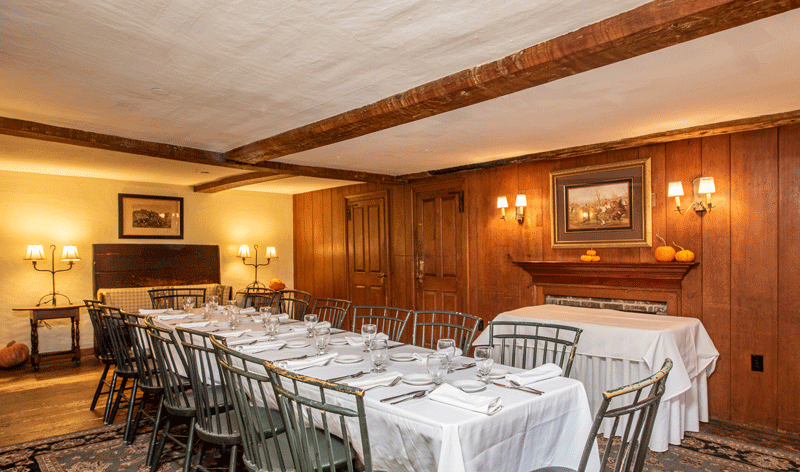 The Hobgoblin Room was originally built in the mid-1700s for public receptions, dancing, and entertainment as part of the second addition to the original Inn. It soon became too small for public use, and a larger hall (the “New Hall”, now The Ballroom) was added in its place. Its current name derives from a story told by a former How family member who claimed to have seen a ghostly apparition floating through this room on a dark night many years ago. During the Inn’s 1955 renovation, this room was reconstructed as an entertainment space, with rich wood paneling, beamed ceilings and a fireplace. It is now mostly used for functions. 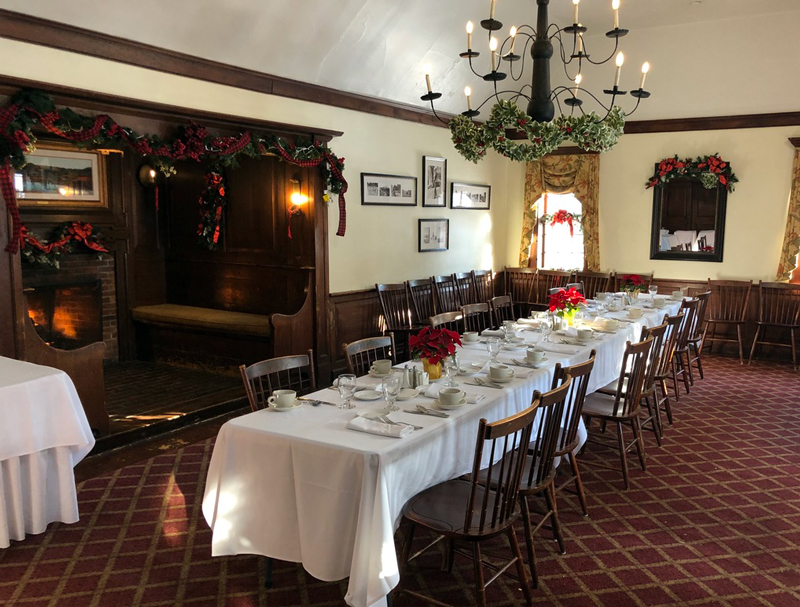 A former wood/carriage shed, in 1899, it was attached to the Inn by innkeeper Edward Lemon and opened as an art gallery to display his collection of paintings and objects d’art. After purchasing the Inn in 1923, Henry Ford added a bay window and used this room as his personal bedroom during his visits to the Inn. A double-benched fireplace alcove provides a cozy place for intimate conversations and a large iron chandelier complements the vaulted ceiling. Today, this room is mostly reserved for function use. 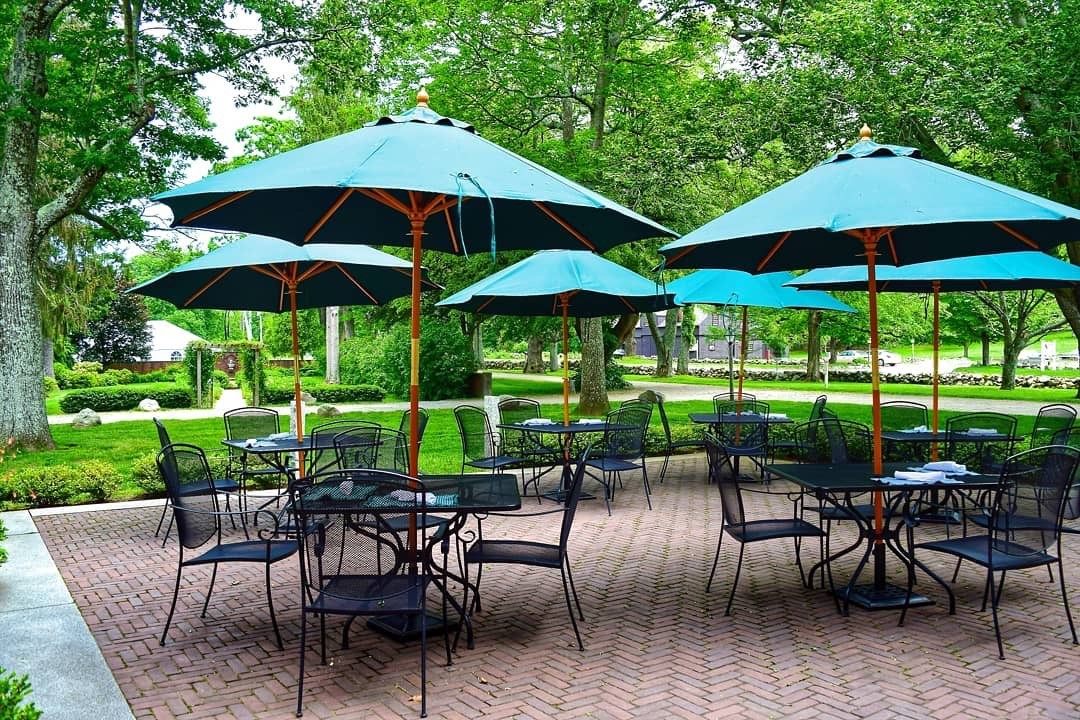 Thank you! Your submission has been received!
Oops! Something went wrong while submitting the form.
Call us to discuss your functions at 978-443-1776 x 2, fill out this form, or e-mail us at functions@wayside.org.

Please note submission of this form serves as an inquiry only.

The Wayside Inn Foundation is a Massachusetts 501(c)(3) nonprofit organization responsible for the care and maintenance of over 100 acres and nine historic buildings including Longfellow's Wayside Inn.